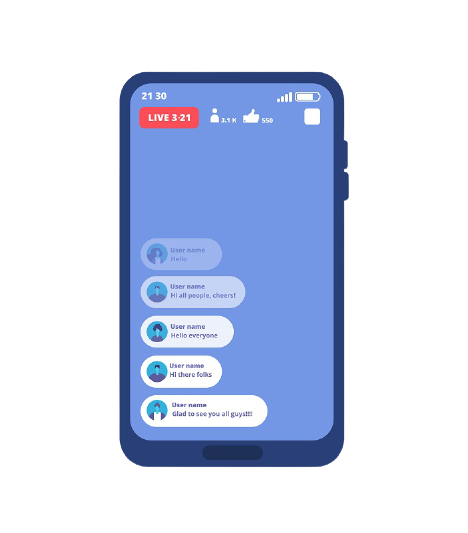 Even though Facebook started offering live video streaming services only a few years ago (April 2016), the popularity of Facebook Live has been growing steadily with users and companies around the world.

Let’s take a look at some of the most important and interesting Facebook Live statistics that you should definitely know.

Before Facebook started offering its streaming service to the general user population, they were first offering it to verified public figures like influencers, celebrities and companies in August 2015.

Regular FB users had to wait nearly six months until they too could use the service in April 2016.

The Facebook community took to the new video format and service quite well from the get-go. Only a year after launch every fifth video on the social media platform came from Facebook Live.

In the same year, 42.7% of businesses broadcasted a live video, whereas, in 2017, two-thirds of companies didn’t create a live video at all.

According to Statista, FB Live was the third most popular livestreaming platform overall by age group after Instagram and YouTube Live.

For 90% of users, the quality of the video on Facebook Live is its most important feature and the number one reason they would skip a video.

Although broadcasters use a variety of ways to engage viewers on FB Live, the most popular type of video among broadcasters to stream, according to Wowza, are live events, with 76%, followed by Q&A interviews and conference panels (23% each).

The average number that a single Facebook Live video gets is 11,314. Compared to that, non-live videos get more than 54,000 shares on average.

While Facebook Live videos get more than 101,000 engagements on average, they still trail behind traditional videos on FB by around 42% and image-based posts by 12% for engagements.

FB Live videos don’t account for a very big percentage of top-performing posts on Facebook, with only 0.74% in the top 10,000 posts.

Videos between 60 and 90 seconds see the best engagement on Facebook, after which the engagement drops and reaches the lowest point for 6-minute videos, but largely remains constant overall.

A 2016 Buffer survey suggested that Facebook video was a priority for online marketers to invest in from day one.

According to the survey, 30% of marketers said they want to invest more in FB video next year, while 28% said that for YouTube and 26% for Instagram videos.

According to Buffer’s State of the Social report for 2018, only 31% of businesses have broadcasted live video content in 2017, whereas 69% haven’t broadcasted a single “live video”.

Facebook is the most popular platform for posting and sharing video content among businesses at 81.2%, according to Buffer.

Of that number, 75% said that Facebook Live helped them generate more sales, while 97% said that it helped customers understand their brand better.

The very first FB Live video was broadcast on the social media platform on 15th September 2015.

Of course, the first video was broadcast by FB CEO Mark Zuckerberg.

The most-watched video to date on FB Live is “Chewbacca Mom” with more than 175 million views.

Since FB Live’s rollout in 2016, the key phrase “Facebook Live Stream” went up 330% in 2018, showing the immediate popularity that the new streaming service took.

As you can see from these Facebook Live statistics, the video streaming service became very popular with both users and marketers almost immediately and is today one of the most popular features that the social media platform offers.

Video marketing plays a huge role in overall marketing efforts and today video is the #1 media format ahead of blogs, ebooks and infographics.

According to Hubspot, live video is the 3rd-most used social media tactic and FB Live plays a big part here.

Is your business posting and sharing live videos on Facebook? If so, do you find it successful?

Let us know in the comments below!