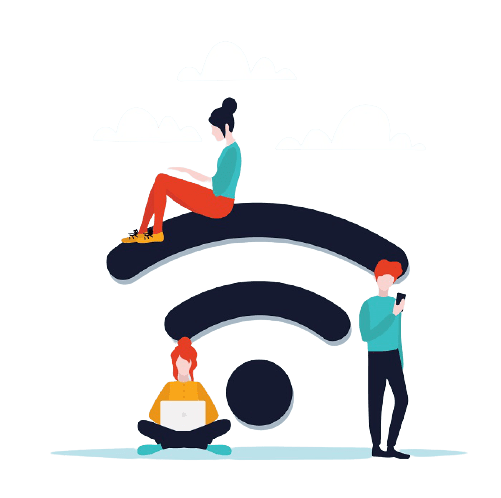 Access to the Internet has never been as important as it is now in a time of a seemingly constant pandemic.

But out of the world population numbering nearly 7.87 billion as of August 2021 how many people are online?

Our estimations show that (as of August 2021) there are nearly 4.82 billion people online around the world and this figure is expected to reach about 5.14 billion by January 2023.

In July 2021, there were approximately 4.80 billion Internet users in the world. This is nearly 61% of the entire global population.

That number is only growing.

There are more than 700,000 new Internet users every day.

The Internet users are growing at a steady yearly rate of about 5.7%.

How Many People are Online by Geographical Distribution in 2021

When we think of Internet users, we tend to think of developed countries in the West first. While the Internet penetration in these regions is the highest (90+ percent), this is in reality a very small part of the global population.

Much more Internet users come from Asia and countries like China and India.

As for the penetration rate (how many of the population uses the Internet), North America has a 93.9% rate.

348 million out of 370 million people use the Internet in North America.

If we take a  look at individual countries, China has the highest number of Internet users in the world at 939.8 million.

How do people get online today in the first place?

Daily time spent with the internet, by device

The growing dominance of mobile Internet users is in large part due to social media.

At the beginning of 2019, 3.26 billion people used mobile devices to connect to their social media.

If we look at individual social media, 98.5% of Facebook users accessed the network from any kind of mobile phone, while 80% of time Twitter users spend on it is from a mobile device.

How Many People are Online at Any Given Time?

So we know how many people have access to the Internet in total, but they’re not all online at the same time.

So how many people are online at any given time? Calculating this number is probably impossible since there are a lot of factors at play, but we can at least give you some idea of how much time people spend on the Internet every day (per hour and per second) and what they do in that one second.

The average time a typical Internet user spends online has been growing and most estimates put that time at around 7 hours per day, or 25,200 seconds, so we’ll go with that.

In one second Internet users:

The Internet is a big place and it is only getting bigger. More and more people around the world get access to it.

However, we need to take these reports perhaps with a grain of salt. The Covid19 pandemic greatly limits research into this, so we may be looking at even higher numbers.

What do you think? Let us know your thoughts on how many people are online.

Vladimir is a content writer working out of Belgrade, Serbia since 2011, specializing in topics such as data privacy, cybersecurity, WordPress and more. He has worked with dozens of online clients in those and other competitive industries, delivering high quality content for their target audience. As a writer, he strives for two things: creating useful content and engaging the reader.

People Online at Any Given Time

How Many Websites Are There?